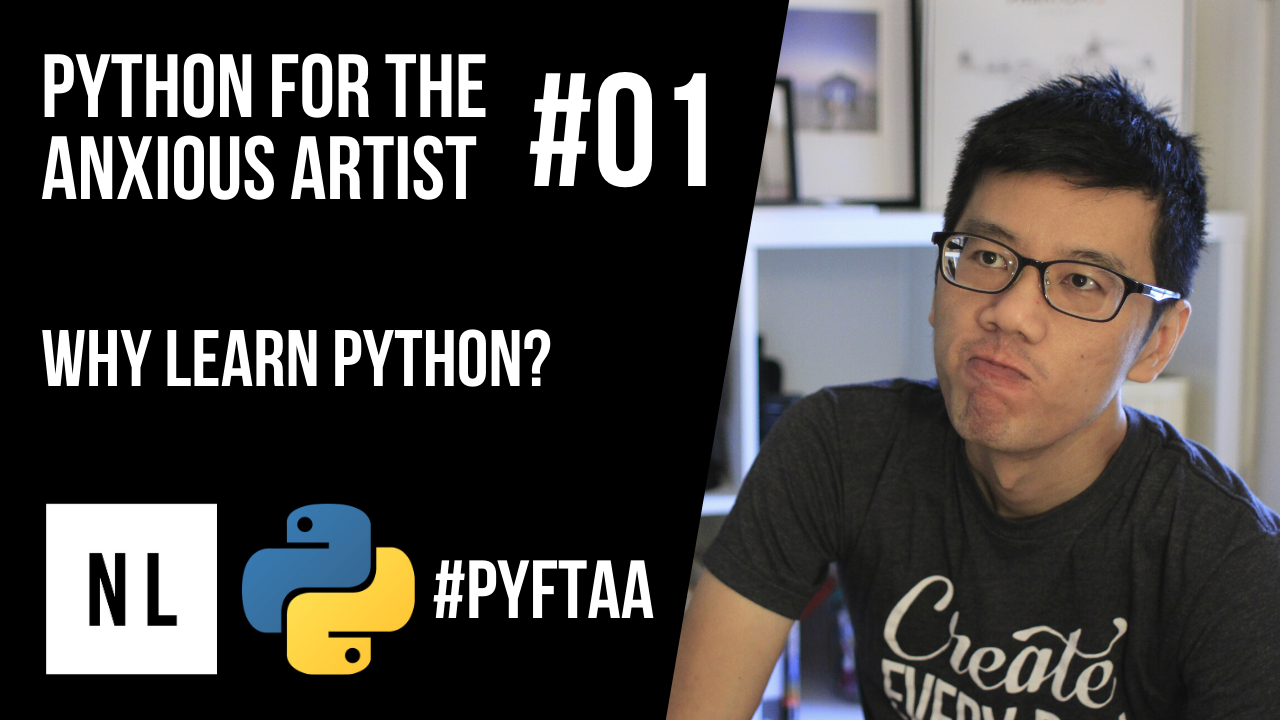 I am very excited to be kick off this series called Python for the Anxious Artist (#PyftAA).

Learning anything new, especially programming can be pretty scary for most people. I am certainly not immune to learning anxieties.

After years of programming, creating CG art and teaching, I wanted to help introduce what I believe is one of the single most powerful tools that an artist can have on their tool belt – Python.

If you have been scared, overwhelmed or discouraged by previous attempts at learning Python. I hope Python for the Anxious Artist(#PyftAA) is the series where you will turn your fear into love for coding.

I will hold your hands and show you step by step how you can finally add this powerful tool to way you create.

Does the word “programming” make you feel anxious? ‌

Perhaps you have been overwhelmed or discouraged from previous attempts.‌

3 years ago you said you’ll learn python. But you’ve been procrastinating since. ‌

I have gotten along just fine and besides life is busy now.‌

Or worst yet you have convinced yourself that artists just aren’t good at programming. ‌

Starting something new can be a rather scary journey. ‌

Especially, learning to program can cause significant anxiety.‌

However, you can learn anything if you keep trying and are given a good chance at it.‌

Well, this series will grease those wheels of procrastination and inaction, as we learn python together in just a couple of minutes every week.‌

This is also a great Python crash course for the individual who might be interested in becoming a Pipeline Technical Director or Software Engineer within the games or movie industry.

As Computer Graphics artists, our job involves creating things in the computer utilizing input devices such as a keyboard, mouse and tablet. ‌

It becomes a natural extension that the skill of learning to tell the computer to perform actions automaticallybecomes an important and highly advantageous skill for the individual artist and the team.‌

Python is the #1 language in DCC software and Game Engines.

Python is the number #1 coding language implemented in every major DCC application and game engine. From Maya, Houdini, Nuke, Blender to Unreal Engine and Unity, just to name a few. ‌

That means the easiest way to learn to tell all these applications to do things automatically is to learn Python.‌

Ability to automate and create anything.

Beyond that, Python also allows you to perform complex file and image manipulations, outside of DCC applications and create intuitive Graphical User Interfaces.‌

It can be used to ensure files are named and stored right. Watermark, resize, convert images/texture or even perform complex operations like identify faces in your images. ‌

So python can free you or your team of laborious & mundane tasks, so you can focus your mental energy on your art and dramatically scale your ability to create. ‌

That’s why pipeline TDs are so prized in the industry.‌

As master artists, the tools we keep in our tool belt are very important. Python can be one of the most important – as it is the tool that can create any tool.‌

The most fun, easy and powerful language in the world.

Finally, the most compelling reason to learn Python, is because of how fun, easy to learn but yet incredibly powerful it is.‌

I’ve learnt and use several programming languages over the years. Java, C/C++, javascript, C#, Pascal, Basic and PHP to name a few.‌

But Python, is the easiest and most powerful programming language to learn. ‌

You can go as deep as you want and create anything with python. From simple scripts to complex enterprise programs. Half of google is built on Python.‌

You know how you feel about ex-girlfriends when you meet the love of your life?‌

I used to like programming, but Python made me fall in love with code.‌

Even the website stackoverflow calls Python “the fastest-growing major programming language” and “the second most loved language” by over 8 million developers worldwide.

Questions about this series?

How many videos? Not sure. As long as it takes. But ideally, each video is shorter than 10 mins.‌

Why this video series? I’ve been a Pipeline TD and an FX artist on several major feature films. I’ve also worked in both Unreal Engine and Unity. Over the years, I have taught many CG artists and students to code. ‌

I have been a developer, an artist and a teacher in the CG industry. So I get it.‌

There are many classes that teach software developers to code in Python, but not as many that relate to the CG industry.‌

What will be in this series? You will learn the basics of python. We will keep it to things not specific to DCC applications. ‌

At the end of this series, you should feel rather confident in your ability to tell the computer to do things for you.‌

And on a personal note, I would love it if this is the series that gets you falling in love with programming.‌

Why not just learn python within a DCC app? We could, except that we will have to choose which DCC application. And we know how Houdini is probably going to win my vote here. ‌

But more seriously, this is a basic introduction to python and I did not want to get into the details specific to individual DCC apps. ‌

We will delve into those topics in future courses if there is sufficient interest.

Hopefully, I got you excited enough about Python and this learning series. ‌

I hope you join me in this learning journey and I have the privilege to introduce this powerful tool to you.‌

NOTE: I sometimes use affiliate links that allow you to easily find the items mentioned at no cost to you. If you do choose to use these links, I may earn a small commission that goes into supporting the work that goes into making these videos and posts available, so thank for your support!

What readers are saying…